Since construction work on the houses ended in May, we’ve been using the Neolithic houses at Old Sarum for all kinds of activities, including the education workshops we’ve been explaining in the few previous posts. We’ve been busy!

We hosted two hugely successful open weekends over the two May bank holidays, helped by some lovely sunny weather. We had lots of visitors coming to see the houses, ask questions and find out about the project. As well as showing off our lovely houses, we’ve been using these open days to collect information about how visitors move around the houses, what sort of questions people are asking, and also asking people to fill in a survey about how they’d like to see the houses presented at the Stonehenge visitor centre. If you’ve received a survey in your e-mail inbox, please respond!

The good news is that we will be having one more public open day at the houses – Saturday 29 June, 10am-4pm. Everyone is welcome to come along and see the houses (no entry fee) – this will be your last chance before they are taken down! There will be flint-knapping demonstrations, and volunteers on hand to explain the houses to you. We’ll be looking for your thoughts and feedback on the houses.

English Heritage photographer James Davies has been down to the houses to take some great photographs – a record of the project, but also we’re planning to use a couple of these  photographs in the new exhibition and on interpretation panels at the new Stonehenge visitor centre.

One of James’s atmospheric photographs.

The houses have provided a useful filming location for some of the short films that will be shown inside the exhibition at the new Stonehenge visitor centre. Phil Harding was filmed making a flint axe and also an oblique arrowhead, and Neil Burridge was filmed smelting and casting an early Bronze Age axe.

Phil Harding making a flint axe outside the houses 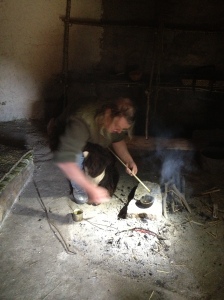 Melting the resin for fixing an arrowhead to the arrow shaft

On 7 May, we invited lots of prehistorians and archaeologists, including many who had excavated the houses at Durrington Walls in 2006-7, to come along and view the houses, and contribute to a discussion about them. We were particularly interested in how the houses compared to the actual evidence excavated, and also to get people’s reactions to more controversial aspects – particularly the form of the internal furniture. 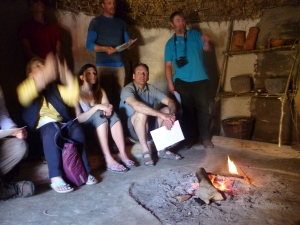 Discussion inside House 851, with Luke and Mike.

We had a fantastic sunny day for the seminar. Mike Parker Pearson, the archaeologist who led the Stonehenge Riverside Project and the excavations at Durrington, walked into the completed house and just said ‘wow’! The discussions and feedback were very useful, and it was interesting to hear contributions from English Heritage’s own Jim Leary, who excavated a similar date building at Marden henge a couple of years ago.

We also hosted a visit on Friday from a group at Bournemouth University, some of those who had excavated and surveyed the houses, who had some useful feedback. We’ll be collating our notes and feeding them back into our decisions about how to build the houses at the visitor centre.

Evaluation and planning for the next stage

The team involved in the Neolithic Houses project now have the task of collating together lots of different information – feedback from our volunteers, visitors and education groups; response from the archaeologists; the experience of carrying out the project; the things we’ve learnt – and use this to help inform decisions about building the houses at Stonehenge. What are the best materials and structural methods? How can we make the houses accessible to all our visitors? How can we build the houses so that they can survive one million visitors a year?

What happens to the houses at Old Sarum?

Sadly we will be taking the houses down at Old Sarum in July. They were always intended to be temporary structures – an experiment in how to build these houses – before building the permanent houses at the Stonehenge visitor centre. Don’t miss the last chance to visit them on 29 June!

2 thoughts on “What have we been up to?”

Tweets from the project