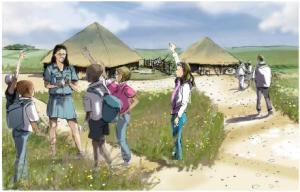 An impression of how the external gallery at the new Stonehenge visitor centre will look. Copyright English Heritage/ Haley Sharpe Design

English Heritage has built a new visitor centre at Stonehenge, which opened to the public in late December 2013. Outside the main exhibition will be an external gallery, featuring some recreated late Neolithic houses. We’ve appointed the Ancient Technology Centre to help us build these houses, which will be built from about February. But first, we built some prototype houses at Old Sarum in Spring 2013.

The aim of this blog is to provide regular updates on the project so that you can follow our progress.

Where and when are you building the houses?

The prototype houses at Old Sarum have now been dismantled. We’ll be building the visitor centre houses from February 2014.

Which Neolithic houses are they based on? And how do they relate to Stonehenge? 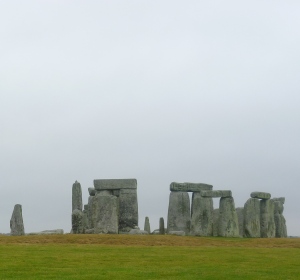 Stonehenge – where did the builders live?

The houses are based on some small buildings excavated in 2006 and 2007 at Durrington Walls, a henge monument just over a mile to the north-east of Stonehenge, as part of the Stonehenge Riverside Project. These buildings date from around the same time as the stones were being put up at Stonehenge, abour 2500 BC. Ten buildings were excavated, and it is likely that there were many more. From the remains of animal bones and pottery near the houses, it seems as if late Neolithic people were gathering at Durrington on a seasonal basis, probably at midwinter. As well as the houses, there were several timber monuments and an avenue linking the complex to the River Avon. It is thought that the people who lived for some of the year in these houses were the builders or users of Stonehenge.

How can I find out more about the Durrington excavations?

The excavations at Durrington were part of the Stonehenge Riverside Project. You can find out more about this research project on the University of Sheffield and Bournemouth University webpages. You can also explore some of the results of the work through Google Earth layer Seeing Beneath Stonehenge.

The full results of the excavations at Durrington Walls will be published over the next few years in a series of monographs.

Why is English Heritage building Neolithic houses at the Stonehenge visitor centre?

One of our aims for the new galleries and exhibition is to inform visitors about the time of Stonehenge, about where people might have lived, what technologies they had and the type of lifestyles they led. By recreating the houses, and dressing them according to our knowledge of the period, we can let our visitors come face to face with the past. Our aim is to create a fun, educational and immersive experience.

How do we know what the houses looked like? 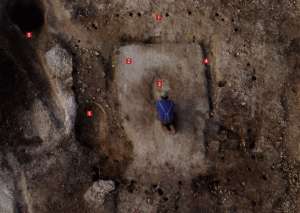 The archaeological evidence for these houses is surprisingly good. Preserved in the soil were the hard chalk floors of the houses, with central hearths and slots where beams, probably for furniture, had stood. Surrounding the chalk floors were the stakeholes left by the walls. There was also some evidence that the walls had been rendered or built with a chalk cob mixture.

Above ground, the appearance of the houses is unknown. One of the aims of this project is to test different materials and structures to see which ones work best.

Why did you build prototype houses? What did you hope to find out?

We built prototype houses for several reasons. One was as an experimental archaeology project, to test different ideas about the above-ground structures of the houses, the types of materials used, the methods of construction. We could then see how our constructions compare with the real archaeological evidence. The aim was also to enable us to build the houses at the visitor centre using the best methods, to make sure that they are safe for our visitors to enter and long-lasting.

We also wanted to build up a core of trained volunteers, and encourage others to join in, and test our ideas for education visits based on the houses. Lastly, on a planned open day, we were able to see how the three houses work as a busy visitor attraction. This will help us build the houses at the visitor centre in the best way, and has fed into our plans for how we will use them day to day as part of the visitor experience at Stonehenge.

What materials will you be using, and where from?

We’ll be using hazel stakes and branches to build the walls, collected from coppiced woodland. We’ll also be collecting together grass, reed and sedge for the roofs, chalk for the floors and cob walls and timber for the furniture inside.

Has anyone done this before? 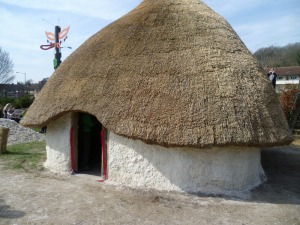 The replica house built by school children and ESAMP at Moulsecoomb Primary School.

The East Sussex Archaeology and Museums Partnership build a house based on one of those excavated at Durrington back in 2010-11, at Moulsecoomb Primary School in Brighton. This project involved working with school children to build the house, and the results were very impressive. The house forms part of a collection of reconstructed buildings that this school has in its playground.

The Ancient Technology Centre also carried out a small project last autumn to build a similar house at Larkhill Primary School, as part of the Layers of Larkhill project.

No one has tried to build these houses as an experimental archaeology project before, nor are there any late Neolithic houses reconstructed in Britain that people can visit, except for those at Skara Brae, Orkney.

Can I get involved?

We have built up a core of trained volunteers to build the houses at the visitor centre, but we are looking for volunteers to talk to visitors about the houses once they are built. You can find out about this Neolithic House Interpretation Volunteer role, and other volunteer opportunities at Stonehenge, on the volunteering pages of the English Heritage website.

Can I come and visit the project?

Yes!The houses will be visible to all Stonehenge visitors from when we begin to build them in February 2014. We will be hosting special tours at different times through the building period. Have a look at the community workshops and open days and tours pages to see the kind of activities that took place at Old Sarum in the prototype phase.

Where can I find out more about visiting Stonehenge?

Have a look at the Stonehenge pages of the English Heritage website to find our more and plan your visit.

4 thoughts on “About the project”

Tweets from the project